Mr Vikram Desai is a prominent orthopaedic surgeon based in Mansfield, Nottinghamshire 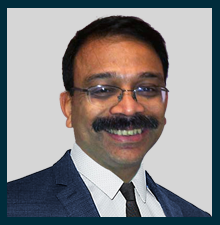 Having qualified in 1986, from the prestigious Grant Medical College, in Mumbai India, he did his orthopaedic training at Sir J.J. group of hospitals before moving to the UK for further training. In England he completed his training from Nottingham and then undertook his specialist fellowship at the Avon Orthopaedic Centre in Bristol in the field of knee surgery.

He was appointed as a Consultant Orthopaedic Surgeon at the King's Mill Hospital in Sutton–in–Ashfield in 2000. He performs a large number of knee and hip replacement operations and also treats knee ligament injuries.

Mr Desai specialises in knee surgery and complex knee problems. He has extensive experience in treatment of knee arthritis and is one of few who perform partial knee replacements, especially in the young patients. He also undertakes Total knee Replacement surgery and specialises in Revision knee surgery and treatment of patients with on-going problems following knee surgery. Further he is well experienced in the treatment of soft tissue knee conditions such as ACL reconstruction in people with sports injuries as well as treatment of recurrent dislocations of patella and anterior knee pain. Himself a keen marathon runner, he understands several issues with biomechanical abnormalities and is keen to help patients return to their activity of choice.

Furthermore, Mr Desai performs several hip replacement operations in a year and has excellent outcomes as published in the National Joint Registry.

As an Honorary Lecturer at the Nottingham University, Mr Desai is actively involved in teaching and training medical students as well as doctors. He has conducted several courses, training not only doctors but also physiotherapists and nurses. He lectures at several courses and meetings as an invited faculty. He is a keen educator who is involved in orthopaedic teaching and training as well as being an instructor at the Acute Trauma Life Support courses. This interest in teaching means that he is an examiner for medical students as well as the FRCS orthopaedic exam. He is a Royal College Representative on the Consultant Appointment Advisory Committee.

In addition to clinical work, Mr Desai is actively involved in research in Orthopaedics. He is part of the Multicentre TOPKAT - total or partial Arthroplasty trial as well as SNAPP - the Anterior Cruciate Ligament Trial. Over the years, he has published several topics in peer review journals and is a reviewer for The Knee as well as BMJ.

The Fractured Scaphoid - A Study of 151 Acute Fractures and A Comparison of Fracture Classifications.
V. Desai Thesis for M C h. Orthopaedics - University of Liverpool. Nov. 1997.

Dystrophic Calcification in the Heel Pad, a case report.
A. Tambe, VV Desai. The Foot